File this under the category of Phrases that Make Me Cringe:

Now, I get that when Baby Boomers began to realize that they were aging, it suddenly became A Thing to be perceived as a Child at Heart. Subsequent generations have followed suit and now we have a culture that really could benefit from the direction of a straight-laced nanny. There is a lot to be said for using your “indoor voice,” particularly when in public on your cell phone discussing your digestion problems with your healthcare provider.

However, I have come to accept that in order to convince ourselves we’re never going to die (I’M certainly NOT), we must do whatever it takes to deny the aging process. (Though, I must pass on to my fellow Women of a Certain Age – no one is fooled by those SnapChat filters. The Good Ship Ingénue has sailed and good riddance!)

So, honestly, I have no problem if adults spend their spare time playing with doll houses, racing remote control cars or running their model trains on a tighter schedule than a subway in Tokyo while wearing a railroad engineer’s hat and blowing a wooden whistle (you know who you are). I, personally, have my gnomes and talking dogs.

If you want to embrace your inner eight-year-old, have at it. But here’s the thing – eight-year-olds break toys. They ram them into walls, leave them on stairways, or throw their sister’s Ken doll out a second storey window dressed in Barbie’s tutu. No big deal because they’re toys.

Two-and-a-half tons of steel and flammable liquid: not a toy. Not even remotely a toy. Leave your heart of an eight-year-old…12-year-old…hell – teenager…home. (It is my opinion that teenagers should only be able to drive 20-year-old Cavaliers with a blown-out transmission and a cassette player that doesn’t work*.)

When I encounter a 6,000 lb. Silverado on the Beltway, I want to know it’s being driven by a 40-something with a kid still in college, a mortgage and a sense of his or her own mortality. (It would also be nice if you could be driving a 3-ton truck because you actually need one, what with it being almost November and I’m still sleeping with the windows open and the fan running – but that’s another issue.)

I commute 10 hours a week at a minimum and I am constantly dodging drivers who grew up watching everything from Smokey and the Bandit to The Fast and the Furious, all – I assume – at a time in their young lives where they were unable to separate fact from fiction. Because it’s really not speed that is the issue; believe me, in that respect my driving habits would probably surprise…well, no, they probably wouldn’t surprise anyone who’s had to commute. Honestly, on a two mile-long straightaway on Va-231, when I’m late for work and no one is in front of me…I WOULD TOTALLY OBEY THE 55 MPH SPEED LIMIT, OFFICER.

Take that same straightaway, place in it a loaded 18-wheeler followed by a leaf-peeper in absolutely no hurry, a farm-use truck whose tailpipe emits noxious fumes every time he hits 40, a priest, a minister, and a rabbi…and me – and in my rear-view mirror I see a black Escalade, closing in fast. In the opposite lane are oncoming headlights. The Escalade pulls out and passes us all in one go and only makes it because the rest of us immediately brake. Though this would be an ideal opportunity to protect the gene pool in one fiery crash, no one wants Finster Baby to take the poor guy in the opposite lane with him. Besides, an accident would make us late.

But even Finster Baby showed good judgement when compared to the perfect storm of idiocy I witnessed last week. In a construction zone in the pouring rain, with two lanes merging into one, I could see an ambulance was trying to make its way through traffic behind me. Most of us pulled over onto the shoulder, except for a farm tractor traveling 15 mph and a huge black truck that was behind me, but passed me when I pulled over to make way for the emergency vehicle. The ambulance was forced to pull into the opposite lane, where those kind souls actually were on the shoulder. Behind me, an SUV pulled out of the line of those who pulled over and passed everyone, only to encounter the black truck, which was now stuck behind the farm vehicle, still putt-putting away like he was in the middle of a barren hay field. With a screech, the SUV pulled over the double line in the wake of the ambulance, passed the black truck (who was now honking his horn at everything) and the farm vehicle. Not to be outdone, the black truck gunned into the oncoming lane, missing by inches the oncoming cars pulling back onto the road.

To what can we attribute such a perfect storm of assholery in one place? Immaturity.

Eight-year-olds live in their own world and everything that goes on around them is seen through the lens of their ego. It is age-appropriate and precisely the mindset you need when you’re very small, vulnerable and totally ignorant of the ways of the world. When it seeps into adulthood, the results are thinking that everything, including who get through traffic first, is a competition you need to win to feed that ego, now grown huge and hungry.

So, no, you do not have a “toy.” You don’t take out loans to buy PlayDough. No one is making a living fixing Cabbage Patch Dolls. When a piece of Monopoly is missing, you just need a dime or a thumbtack.

And when a pedal car tips over, no one gets hurt.

Unless, of course, it meets up with a black Escalade. In his world, we’re all just pedal cars on the VA-231 of life. 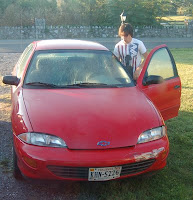 Yes, he still has this car. Good luck in December, Heir 2!

As always, a snarky yet light take on your world and our general toy-foibles. May folks remain young at heart but stay out of your way when that youth takes over the frontal lobes!

...and don't even get me started about the "car people" I met when I was working at the DMV. They wheeled and dealed cars like they were trading baseball cards or marbles.

Sisiggy
"...all her teeth were even. That's a rare, fair feature: even teeth. She smiled to excess, but she chewed with real distinction." Eleanor of Aquitaine, Lion in the Winter

Please obtain permission before using any of my original writing or photos.

Photos, mostly of the dogs...